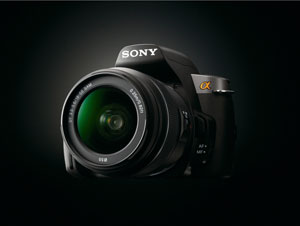 Today Sony has released three new DSLR camera bodies that were rumored for some time now. At the same time, they also released some of the lenses that were previewed at PMA 2009. And, last but not least, a new low-power flash unit accompanies the releases.

The new cameras are:

These cameras are only minor upgrades to their respective predecessors. Most tech data is unchanged. The most important changes are:

It's also interesting to see how the cameras differ from widespread expectations and concerns:

The new lenses are:

Common to these lenses is that they all contain an in-lens AF motor. Sony calls this lens type SAM, not SSM. Obviously they do not contain an ultra-sonic ring motor as the higher-class SSM lenses, but ultra-sonic micro motors.

Very little information is currently available about these lenses. I will update the lens data sheets as new information comes in.

The new flash is:

HVL-F20AM
This is mainly a low-power compact flash for the three new cameras. The guide number is 20 meters. It can be folded down while mounted on the camera. The flash tube can also be tilted up for bounce flash operation. Another interesting detail is that this flash can also act as a wireless flash controller when mounted on the α900. Until now A900 owners had to use the HVL-F58AM for wireless flash control.